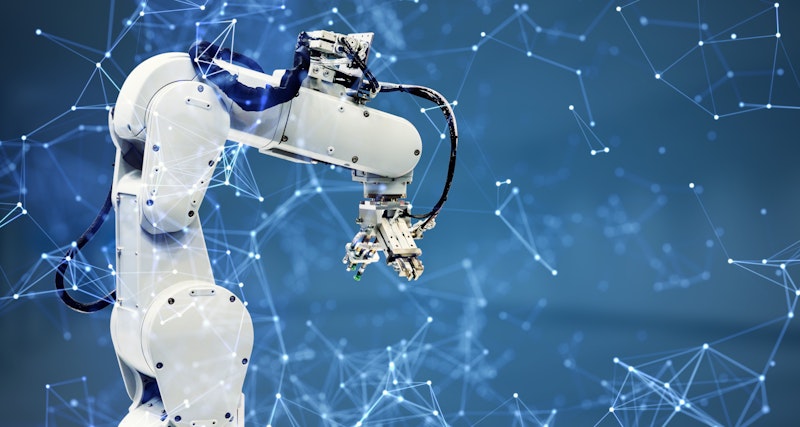 Collaborative robots, also commonly known as cobots, refer to robots that work side-by-side with human operators. Unlike industrial robots that are separated from human operators, cobots share the same working space as humans. As a relatively new definition, cooperative robots sound like collaborative robots but represents a different nature of the operation. Cooperative robots refer to industrial robots with a virtual fence between human operators and themselves. In terms of the product position, the cooperative robot stands in the middle of industrial robots and cobots, combining the benefits of both industrial robots and collaborative robots with the aid of safety sensors (laser scanners typically).
Below is a chart showing the relationship between machines and humans by productivity and task complexity. Humans and cobots are more competent in handling complicated tasks, yet they usually have a much lower throughput compared with dedicated machines (e.g., computer numerical control (CNC) machines, etc.) or industrial robots. On the contrary, industrial robots and dedicated machines have high productivity but limited ability to handle complicated tasks as they are programmed specifically for a certain type of task. In modern society, the increasing demand for productivity and work complexity requires manufacturers to find a balance between productivity and the ability to perform complicated tasks. While cobots have demonstrated some benefits to handle high-mix low-volume (HMLV) manufacturing, one of the fundamental issues is the low operational speed and low productivity. IDTechEx's report "Collaborative Robots (Cobots) 2023-2043: Technologies, Players & Markets" explains how cobots can be used for HMLV manufacturing, why the speed has to be restricted, and what consequences it could have when it comes to the manufacturing industry and small and medium-sized enterprises. In order to meet the requirements for both productivity and flexibility/multi-tasking ability, cooperative robots are introduced.

Comparison of industrial robots, collaborative robots, manual labor, and cooperative robots. Source: IDTechEx
How Do Cooperative Robots Work?
LiDAR-enabled cooperative robots split the areas around the robots into three zones that can be described as red, orange, and yellow. When human operators walk in the yellow zone, the robot operates at full speed and has the maximum output. When the human operators or objects appear in the orange zone, the robot will operate at a reduced speed, and if the robot detects human operators in the red zone, the emergency stop function of the robot will be triggered, thereby stopping the robot. With the segmentation of operational speed based on human-robot distance, the robot can maximize its throughput by operating at full speed when working independently and ensuring a safe interaction when human operators are in proximity.
What Are the Cheaper Sensors Options? Would Light Curtains Be Favorable by Industrial Robot Users?
Although cooperative robots have demonstrated potential opportunities to increase the productivity of robots while maintaining a high level of human-robot interaction. The fundamental barrier to adoption is the high cost. LiDAR is relatively expensive, and depending on the specifications, it can cost thousands of dollars. An alternative option is using light curtains to replace the physical fence. Robot users replace one or multiple fences with light curtains made of photoelectric sensors to enable easier access for human operators compared with physical fences. Depending on the resolution, the cost of light curtains is typically between US$300 and US$500. More details about the sensors used in the robotics and automation industry can be found in IDTechEx's latest report, "Sensors for Robotics 2023-2043: Technologies, Markets, and Forecasts".
Outlook for Cooperative Robots
In conclusion, cooperative robots have demonstrated both higher working efficiency and a higher level of human-robot interaction compared with traditional industrial robots and emerging collaborative robots. At this stage, because of the high costs of LiDAR, the adoption of cooperative robots remains relatively low. However, IDTechEx expects that with the increasing demand of LiDAR in mobile robots (e.g., automated guided vehicles (AGVs) and autonomous mobile robots (AMRs)) and service robots because of the loosening regulations introduced in IDTechEx's report "Mobile Robotics in Logistics, Warehousing and Delivery 2022-2042", "Service Robots 2022-2032", and "Agricultural Robots and Drones 2022-2032", the average cost is expected to drop gradually, thereby encouraging its use in cooperative robots. More details about sensor price changes and the granular market size forecast by sensor type and task can be found in IDTechEx's latest research on "Sensors for Robotics 2023-2043: Technologies, Markets, and Forecasts".