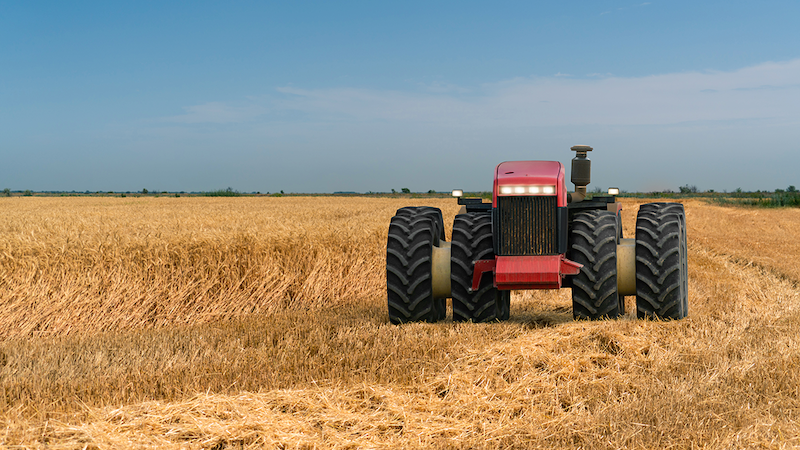 According to Hansotia, about "13% of the global calories came out of production" when Russian and Ukrainian borders shut down. The Russia-Ukraine war has put pressure on farmers globally to produce more crops to make up for a gap in supply left by the two countries. As prices of wheat, fuel, and fertilizer rise, the total costs for farmers have been increasing. For instance, due to the Ukraine-/Russia-related Sanctions, post-effects of quantitative easing during COVID, and supply chain disruptions, the prices of Brent crude oil have quadrupled from around 28 USD/Bbl (Barrel of crude oil) in March 2020 to 105 USD/Bbl.
The agricultural industry is already vulnerable due to highly commoditized products, heavy competition, and thin profit margin. Therefore, it is no surprise that the rise in fuel and fertilizer prices will likely exacerbate this situation, making farmer's business even more difficult. Meanwhile, to maintain the same level of global food supply as the pre-war level, more food needs to be produced, and the increasing demand leads to a higher pressure on farmers to produce more crops.
Given the intensified financial struggle, together with higher demand for food production, improving farming efficiencies is imminent. One efficiency improvement is to adopt automated machines - agricultural robots (also known as automated agricultural machinery). Human laborers are limited with their working hours and high operational costs (wage), whereas agricultural robots are much more cost-effective in the long run. At this stage, the adoption rate of agricultural robots remains relatively low due to several issues, including lack of technical robustness, high upfront costs, complicated technologies, and many others. Until these problems are resolved, IDTechEx do not expect agricultural robots to be widely adopted. However, one thing that is particularly worth noting is that although there are multiple associated issues, some applications of agricultural robots have been commercialized thanks to their relatively simple technologies and short payback time. Examples include milking robots, agricultural drones, and automated weeding robots. Although several applications are struggling to get scaled up due to lack of funding, incredibly high technological requirements, and a lack of willingness to buy, IDTechEx have seen efforts being made to resolve these issues.
To address these problems, IDTechEx have recently published a report - "Agricultural Robots and Drones 2022-2032: Technologies, Markets & Players", where technologies, types of agricultural robots, their drivers, barriers, stages of commercialization, and application areas are analyzed in depth. 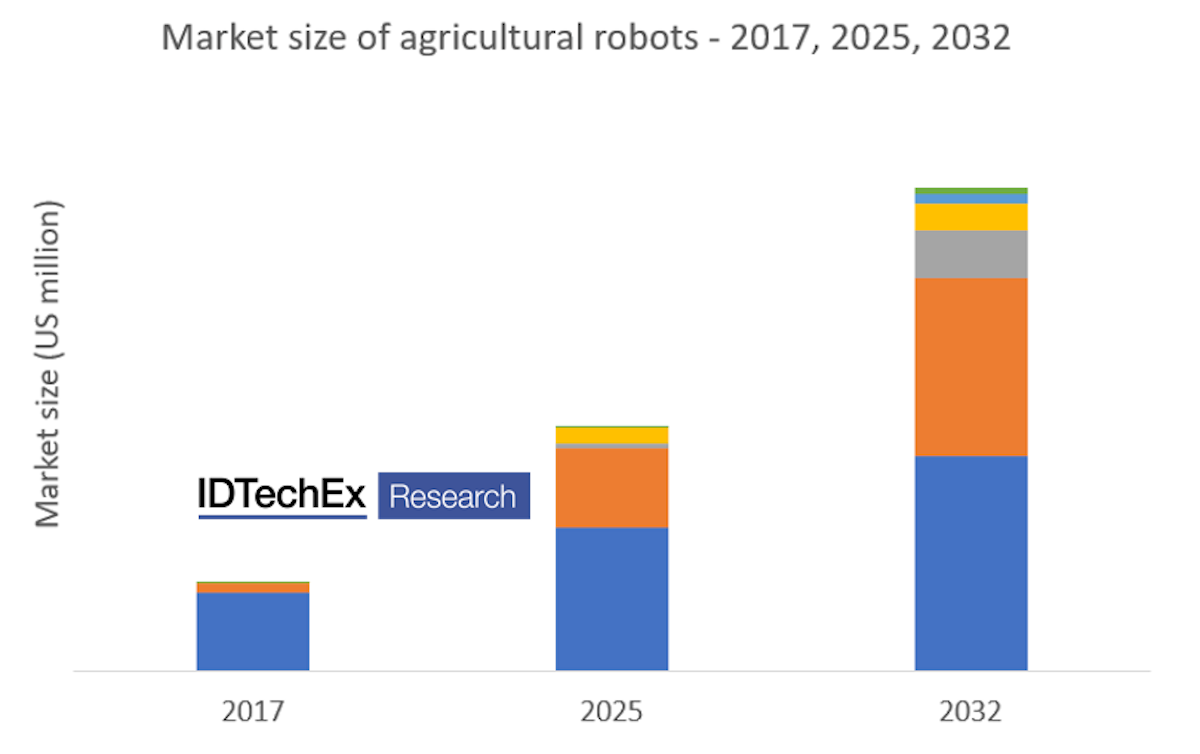 Market forecast of agricultural robots: 2017, 2025, and 2032. Source: IDTechEx - "Agricultural Robots and Drones 2022-2032: Technologies, Markets & Players"
Based on primary and secondary analysis, IDTechEx believe that the agricultural robot industry is expected to grow quickly thanks to the high efficiencies and low operating costs. These advantages can be the ideal solutions to the previously mentioned challenges in the agricultural industry. Amongst all of the applications, IDTechEx believe that autonomous tractors and carriers will be one of the major drivers due to the increasing efforts in the autonomous driving sector. Compared with on-road vehicles, autonomous tractors and carriers for agricultural applications must tackle difficult terrain, limited access to the infrastructure and many other issues. These risks enhance the technical difficulties of implementing autonomous driving technologies on agricultural machines. However, with improvements in technologies such as sensory systems and artificial intelligence (AI), these problems are soon expected to be resolved. Earlier this year, at the CES show 2022, John Deere introduced its latest autonomous tractors that end-users can remotely monitor via mobile apps. According to one of the farmers interviewed by IDTechEx, labor has always been an issue in agriculture. Farmers need labor and long working hours to make sure that harvesting/seeding can be completed within short specific time windows. However, with the aid of autosteer/autonomous driving technologies, the workload for farmers could be significantly reduced, resolving labor issues.
Although the agricultural industry is relatively conservative compared to other industries, IDTechEx do see a huge potential in agricultural robots/automation in agriculture. Unlike many years ago, when technologies were not ready and labor was cheap, the current situations (increasing technical robustness, high labor costs, rising fuel costs, and the demand for higher food production) almost provide a perfect opportunity for people to adopt agricultural robots. IDTechEx believe that in the upcoming decade, the agricultural robot industry will go through a rapid increase.
For more information on this report, please visit www.IDTechEx.com/Agri or for the full portfolio of AgTech research available from IDTechEx please visit www.IDTechEx.com/Research/AgTech.
IDTechEx guides your strategic business decisions through its Research, Subscription and Consultancy products, helping you profit from emerging technologies. For more information, contact research@IDTechEx.com or visit www.IDTechEx.com.