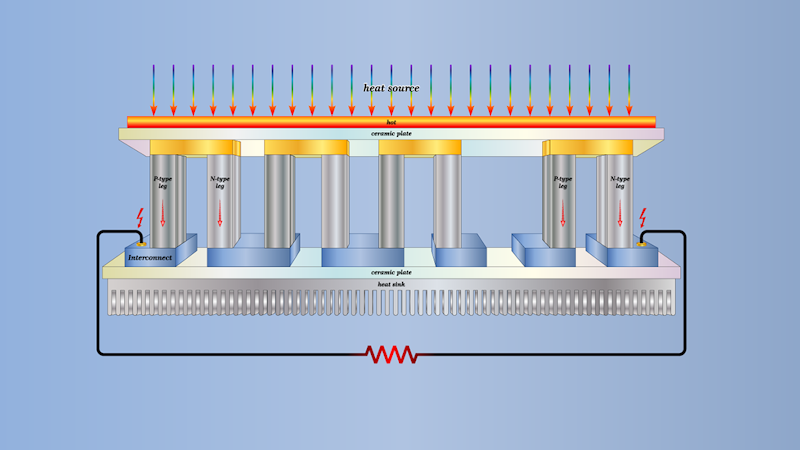 Thermoelectrics is a business impeded by the use of the toxic rare metal Tellurium. Commendably, there is a trend to alternatives in research but few volume sales as yet in any of the three uses. These are energy harvesting to make electricity where it is needed and the more successful cooling and heating, those last two constituting very-reliable, solid heat pumps.
The IDTechEx report, "Thermoelectric Cooling, Heating, Harvesting: 90 Companies Appraised, Market, Roadmap 2022-2042" has the full analysis. It recommends a U-turn to optimize the parameters and using the materials that industrialists really need. IDTechEx has a drill-down report on what is currently the least successful aspect, "Thermoelectric Energy Harvesting and Other Zero-Emission Electricity from Heat 2022-2042", concluding that even this can be a multi-billion dollar industry. Indeed, it could leverage geothermal energy and open up other large applications if approaches are revised.
One of the newer thermoelectric approaches reflects how photovoltaics is nearly all silicon, with tellurium compounds having a place but no longer represented in the top ten manufacturers. For example, Mark Lee, Ph.D., Professor of Physics & Materials Science in the Department of Physics at the University of Texas at Dallas tells analysts IDTechEx,
"Using standard industrial silicon processing methods, we have demonstrated silicon-based thermoelectric generators (TEGs) that produce electrical power per unit area comparable to the best existing bismuth telluride based TEGs operating from the same temperature difference near room temperature, even though our silicon TEGs have much lower thermodynamic efficiency as expected. We have shown that, using a small copper rod heated to about 20°C above room temperature as the sole energy source, our silicon-based TEGs can properly energize some existing commercial low-power integrated circuits that are intended for use as IoT electronics.
Because our TEGs were fabricated on an industrial silicon integrated circuit fabrication line, these TEGs are easily manufacturable at large scale volume and can be directly integrated on-chip with the circuits they energize. This should result in extremely low marginal cost per TEG and cost-per-Watt generated, compared to bismuth/lead telluride/selenide based TEGs."
IDTechEx is optimistic about all this. It forecasts that the total thermoelectric business, including subsystems such as current ones for thermal control in car seats, can be over $11 billion as early as 2032. That presumes robust refocussing on more appropriate markets, materials, and parameters. For example, no more delusional work on making electricity from car exhaust pipes that will no longer exist.
For more information on these reports please visit www.IDTechEx.com/Thermo and www.IDTechEx.com/ThermoCo, or for the full portfolio of research available from IDTechEx please visit www.IDTechEx.com/Research.
IDTechEx guides your strategic business decisions through its Research, Subscription and Consultancy products, helping you profit from emerging technologies. For more information, contact research@IDTechEx.com or visit www.IDTechEx.com.