The transparent conductive film (TCF) industry will leave behind its years of sluggish growth to achieve rapid growth, serving a size of more than 60 million square meter (sqm) per year (glass based layers excluded). Indeed, this industry is entering a new phase. Some ITO alternatives have matured, receiving increasing market adoption. In their new report, Transparent Conductive Films (TCF) 2017-2027: Forecasts, Markets, Technologies, IDTechEx Research finds that ITO alternative TCFs will become $400m+ market by 2027, although not all alternatives will benefit equally.
New market opportunities are emerging, changing the prospects of various technologies and increasing the demand overall in the coming years. In fact, IDTechEx Research forecasts that these new market opportunities will grow to represent nearly 45% of the total TCF market in 2027, up from <10% in 2017. The usefulness of the strategy of slashing prices to protect market share will have plateaued, bringing more stability to the market.

Multiple technologies have been developed in the past 15 years to act as TCFs with mixed commercial results. This report provides a full, global and up-to-date picture of the industry dynamics and business landscape. Some TCF technologies have under-performed even compared to the incumbent solution and have thus faced an uphill battle to gain market acceptance, whilst others have established themselves as sustaining technologies to further the performance of TCFs in markets that require the same function but higher performance.
Leading ITO alternative technologies are however beginning to make commercial impact. Metal mesh, in particular, is leading the pack. The technology has improved, both in terms of performance and yield, whilst new methods of manufactures are continually developed. Silver nanowires have seen multiple false starts, often coming tantalising close to major success stories. The supplier base here has expanded as the business landscape has been re-drawn with recent acquisitions.
These two technologies have raised the performance bar for other ITO alternative technologies such as carbon nanotubes, PEDOT, graphene and so on. These technologies face dimmed market prospects in this sector, and are thus in the process of re-inventing themselves to offer what others cannot easily do, e.g. stretchability.

There is sustained technology progress in developing better and cheaper TCFs. Transparent Conductive Films (TCF) 2017-2027: Forecasts, Markets, Technologies provides a detailed assessment of the existing and emerging technologies including ITO film/glass, various types of metal mesh, silver nanowires, PEDOT, carbon nanotubes, graphene, and so on.
Numerous methods of producing metal mesh are now in development; namely: photo-patterning and photolithography, embossing followed by printing or etching, direct screen printing, direct gravure offset printing, resist printing followed by etching, self-assembled particles (inkjet printed or otherwise), and so on. Some metal mesh TCFs have reached commercialization and are in the process of improving yield and reducing costs particularly as they transition to larger sizes, whilst others remain in the prototyping phase.
Silver nanowire technology is mostly in the phase of cost reduction, whilst slow progress is made on improving the resistivity-haze trade-off and addressing some reliability issues. The supplier base has expanded even as the market awaits a new major success stories, whilst IP concerns loom large in the minds of some end users.
Carbon nanotubes and PEDOT are increasingly emphasising their flexibility, stretchability, and moldability, whilst graphene generally remains an immature technology that underperforms. Here, the focus of technology improvement is in automating the transfer progress over large-area with compromising yield or film properties.

The consumer electronic touch screen market is the primary market driver for TCFs. Here, the trend has long been towards (1) lower resistance, (2) lower cost films, and (3) flexibility. The first is to enable larger sizes without compromising response time, the second to stay competitive in the consumer electronics industry, and the third to enable flexible displays and other touch surfaces. These long-standing trends continue to shape the technology and market development for TCFs.
All the same, new market opportunities are emerging. Touch surfaces are growing ultra large in the form of whiteboards, tablets, and other large-sized interactive surfaces. Automotive displays are also on rapid rise, creating new demand but also new requirements. Here, the displays will be large (e.g., 7inchs or higher), whilst automotive OEMs will follow the trends in consumer electronics to offer new form factors.
In mold electronics is gaining traction both for automotive and home application applications. Here, formability will be a crucial factor. OLED lighting remains an area of interest with a promising long-term future but critical challenges remain in the medium-term. Third generation photovoltaics continue to search for applications but require flexibility in order to set themselves apart from traditional mature photovoltaic technologies. Smart window remains largely glass based but progress on film based solutions remains persistent. 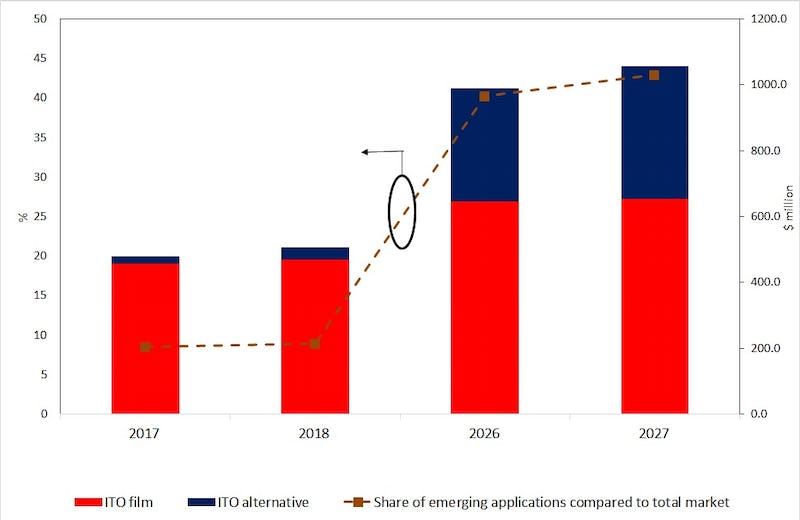