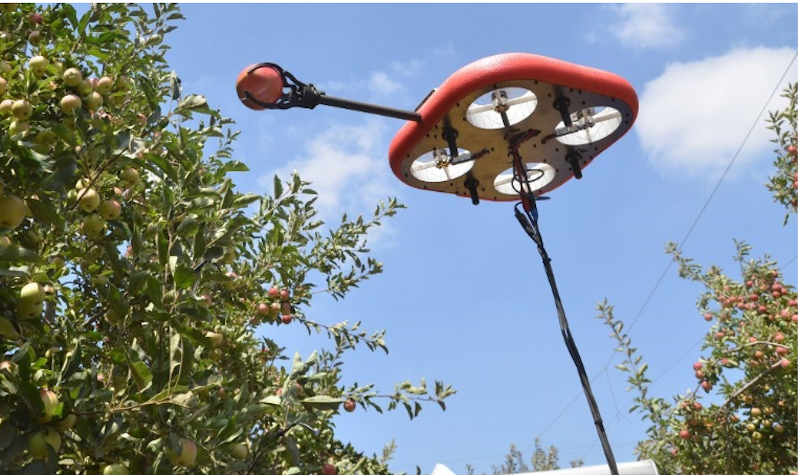 Tevel, founded in 2017 in Israel, is developing autonomous flying robots for fruit picking combining AI with computer vision, advanced robotics, aeronautical engineering, state-of-the-art flight control and data fusion and perception. Tevel has solved numerous technological challenges and is expected to implement trials in Spain, USA, and Italy in apple plantations of over 100 Ha. Tevel's solution allows high levels of flexibility that enable the harvest of multiple fruit types.
According to Kubota, a company that has invested in the Tevel system, every year, over 800 million tons of fruits are produced in an area of 70 million hectares worldwide, representing an annual market value of $1 trillion. Farmers spend annually $100 billion on fruit picking and recruit over 10 million temporary workers for a short period of time to pick their fruit. These seasonal workers are harder and harder to find, recruit, train, employ and provide temporary housing for. Sourcing and operating field workers during the picking season is a major constraint that risks their investment and profitability for the season, as well as their ability to pick all of their fruit within a short and competitive time window. In addition, due to the complexity in crossing borders and international travel during the pandemic, the Covid-19 crisis has further aggravated the labour shortage and increased the risk in fruit production by limiting the availability of migrant workers. Therefore, Tevel's solution increases global food security by providing an available and reliable supply chain. For further information see the IDTechEx report on Agricultural Robotics Market 2022-2032.
According to Tevel, the shortage of pickers causes more than 10% of fruits worldwide not to be harvested (equivalent to the EU annual consumption) and the fruit picking robot is designed to complement existing fruit pickers and not merely to substitute them.
Source: Kubota, Tevel
Top image: Kubota