AI Based Companion to Address Isolation and Loneliness 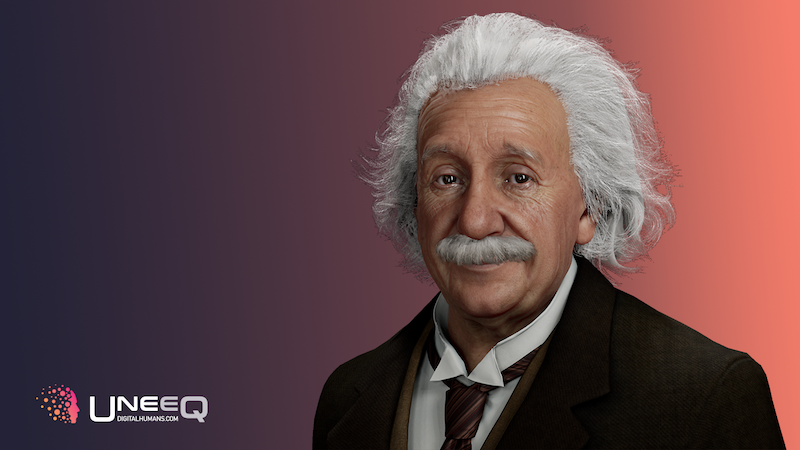 UneeQ, a United States and New Zealand-based digital human company, has launched Digital Einstein, part of UneeQ's new Companions series. On the 100th anniversary of Albert Einstein's Nobel Prize in Physics, UneeQ has remastered Einstein as a digital human driven by conversational and experiential AI to create a first-of-its-kind, meaningful experience with one of history's greatest minds. Digital Einstein, an example of Experiential AI, is the next evolution of human-to-machine interaction, leveraging digital humans to drive personality-led engagements that move customers, patients, students, and end users beyond transactions and into meaningful, emotional interactions.
Powered by UneeQ's state-of-the-art digital human platform, Digital Einstein flawlessly recreates Einstein's personality traits and mannerisms and is available to anyone who would like to speak with him 24-hours a day. Digital Einstein can test an individual's knowledge on a variety of topics through his daily quiz, or they can have a personal conversation about his life's work and research. The Digital Einstein experience was created as an opportunity to engage across multi-generations, but more specifically, provides a friendly face and personality for those most suffering from the continued isolation and loneliness felt during the past year.
"Mental health and companionship are long-standing problems facing our society today, of which COVID-19 has significantly exacerbated," said Danny Tomsett, CEO of UneeQ. "One of UneeQ's core values is 'Tech for Good', and we are actively seeking ways to apply our innovative solutions to that cause. As part of our new Companions series, Digital Einstein, among other digital humans, can communicate with people in a way that comes most naturally - using conversation, human expressions, and emotional responses to best provide daily interactions that we hope make a difference in people's lives."
As more and more people struggle with loneliness due to isolation from family, friends and colleagues in the wake of COVID-19, UneeQ's AI-powered Companions serve as ambassadors capable of recreating human compassion and emotional connections at an infinite scale.
While UneeQ Companions are not designed to replace human engagement, digital humans are able to augment human interaction, particularly in today's disconnected and touch-free world. In some studies, digital humans have been found to negate people's concerns around judgment, shame or guilt - emotional roadblocks that deter many from confiding and trusting fundamental human interactions. UneeQ Companions help bridge that gap through tone of voice and human-like expressions that allow the digital human to show sympathy, warmth, excitement, friendliness and empathy.
Einstein's likeness, and rights to his research were provided by The Hebrew University of Jerusalem and Greenlight, a subsidiary of BEN Group Inc. and a global rights clearance and licensing business who works to ensure Einstein's legacy and research have a lasting impact on society.
"Albert Einstein, a founding father of the Hebrew University of Jerusalem, is considered one of the greatest scientists of all time. His work is the basis for our understanding of the universe and its development. We were delighted to work with UneeQ on this groundbreaking project, knowing that Einstein's legacy continues to educate and guide the minds of tomorrow through interactive AI technology," said Yishai M. Fraenkel, Vice President and Director General, the Hebrew University of Jerusalem.
"Whether it's one of the most influential minds in the world or a modern-day influencer, progressive companies are leveraging today's digital channels to connect global brands with consumers through the power of next-generation technology, including digital humans," said Ricky Butler, CEO of BEN. Butler continues, "We are honored to play a role in the impact Digital Einstein, among other virtual influencers, will have on society's mental health problem."
This project has been made possible with the help of several talented companies including Aflorithmic (Digital Einstein's voice), Goodbye Kansas Studios (Digital Einstein artist rendering), and WolframAlpha (Digital Einstein's intellectual responses).
Source and top image: UneeQ