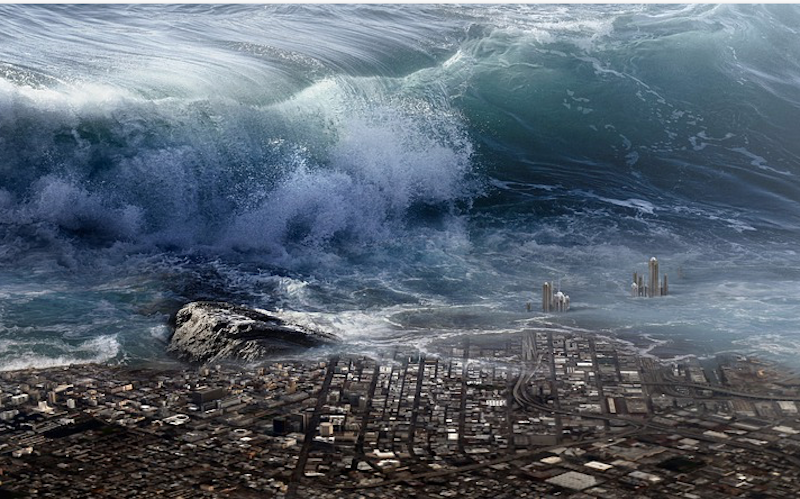 The International Research Institute of Disaster Science at Tohoku University, the Earthquake Research Institute at the University of Tokyo, and Fujitsu Laboratories have announced the successful development of an AI model that will empower disaster management teams with the ability to predict tsunami flooding in coastal areas in near real-time, harnessing the computational power of the world's fastest supercomputer, Fugaku, jointly developed by RIKEN and Fujitsu.
As part of the joint initiative, several high-resolution tsunami simulations were carried out using Japan's flagship supercomputer Fugaku. A new AI model was then created using simulated offshore tsunami waveforms and coastal flooding conditions as training data.
In the event of an actual earthquake, inputting tsunami waveform data observed offshore into this newly created AI model will allow for predictions of flooding conditions in coastal areas before landfall at high spatial resolution. This will make it possible to more accurately and rapidly obtain detailed flooding forecast data for specific areas, offering critical insights into the effects of localized waves on surrounding infrastructure like buildings and roads in coastal urban areas. Furthermore, the AI model, trained in advance with Fugaku, can be run in seconds on ordinary PCs, making it much easier to build practical, real-time flood prediction systems, which previously required supercomputers. Ultimately, this technology offers the potential for disaster management teams to make near real-time, data-driven disaster mitigation and evacuation measures.
Background and Challenges
In March 2011, The Great East Japan Earthquake triggered a massive tsunami that inflicted catastrophic damage in the Tohoku region along the eastern coast of Japan, throwing the challenges of disaster mitigation efforts into painful relief. This tragic event revealed that many issues remain from the viewpoint of acquiring and utilizing information for efficient and safe evacuation in the event of a disaster.
Tsunami prediction represents one key area in this respect, requiring the development of technologies to allow authorities to quickly obtain accurate and detailed information to help disaster management teams mitigate damage by ordering appropriate evacuation actions. Since the Great East Japan Earthquake, the tsunami observation network in Japanese coastal waters has been significantly strengthened to this end, while the development of highly-accurate tsunami prediction technologies in coastal areas that leverage real-time off-coast tsunami observation data has been promoted as an urgent priority.
Conventionally, coastal tsunami predictions have been mainly based on the method of selecting the data with the most similar earthquake and tsunami occurrence conditions compared with observations from databases prepared in advance by simulations, and the method of gradually adjusting coastal tsunami predictions to be consistent with offshore tsunami observations. In both cases, simulation calculations for flood predictions rely on large-scale supercomputers or database searches, which makes it difficult to implement and operate a feasible prediction system.
About the Newly Developed Technology and Initiative
To resolve this, Fujitsu, Tohoku University, and The University of Tokyo worked to jointly develop a high-resolution AI technology that can instantaneously predict tsunami flooding by utilizing the pre-shared evaluation environment of Fugaku in the research subject "Exascale AI based Tsunami Forecast to Predict the Unpredicted" (2) selected in the FY 2020 Fugaku Preliminary Use Projects (3) solicited by Research Organization for Information Science and Technology.
By leveraging the exceptionally fast computing power of the supercomputer Fugaku, the project members generated training data for 20,000 possible tsunami scenarios based on high-resolution simulations in three-meter units. By training an AI model with these 20,000 data sets, it was possible to build an AI model that can predict the flooding of land areas with similarly high resolution from tsunami waveform data observed offshore at the time of an earthquake.
For the AI model, a new deep learning technology was developed, with a two-stage configuration of AI that first approximates the flooding situation on land in rough resolution from the tsunami waveforms observed offshore. Then, the AI is applied to increase the resolution of the estimated flooding conditions and optimizes calculation performance for learning in Fugaku. Normally, computers suitable for simulation and computers suitable for AI are different, but with this initiative, the project members were able to leverage the special features of Fugaku to greatly streamline the creation of AI for high-precision tsunami prediction by using training data generated on Fugaku as is for machine learning. Namely, Fugaku offered the project members a powerful resource that delivers high performance in both simulation as well as AI applications.
When this technology was applied to the case of tsunami flooding prediction in Tokyo Bay caused by a theoretical, massive Nankai Trough earthquake, it was confirmed that highly accurate prediction was possible using a regular PC in a matter of seconds for a variety of different tsunami scenarios, including the tsunami model assumed by the Cabinet Office of Japan.
By further utilizing the large scale, high speed performance of Fugaku in the future, while simultaneously training the system with additional tsunami scenarios, the partners can help to realize AI that can offer predictions for unexpected tsunami and flooding predictions over a wider area. In the future, the three parties will contribute to tsunami disaster prevention measures in Japan and internationally by promoting the expansion of AI technology and evaluation of prediction accuracy to help accelerate real-world application of the technology.
Source: Fujitsu
Top image: Pixabay