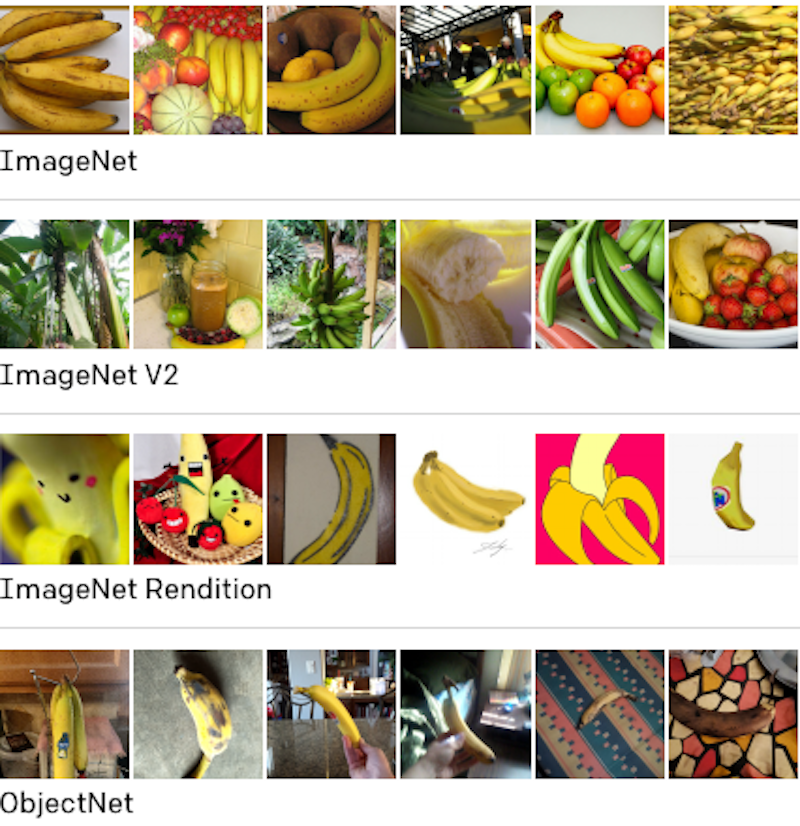 Although deep learning has revolutionized computer vision, current approaches have several major problems: typical vision datasets are labor intensive and costly to create while teaching only a narrow set of visual concepts; standard vision models are good at one task and one task only, and require significant effort to adapt to a new task; and models that perform well on benchmarks have disappointingly poor performance on stress tests, casting doubt on the entire deep learning approach to computer vision.
Open AI presents a neural network that aims to address these problems: it is trained on a wide variety of images with a wide variety of natural language supervision that's abundantly available on the internet. By design, the network can be instructed in natural language to perform a great variety of classification benchmarks, without directly optimizing for the benchmark's performance, similar to the "zero-shot" capabilities of GPT-2 and GPT-3. This is a key change: by not directly optimizing for the benchmark, it becomes much more representative:the Open AI system closes this "robustness gap" by up to 75% while matching the performance of the original ResNet50 on ImageNet zero-shot without using any of the original 1.28M labeled examples.
CLIP builds on a large body of work on zero-shot transfer, natural language supervision, and multimodal learning. The idea of zero-data learning dates back over a decade but until recently was mostly studied in computer vision as a way of generalizing to unseen object categories. A critical insight was to leverage natural language as a flexible prediction space to enable generalization and transfer. In 2013, Richer Socher and co-authors at Stanford developed a proof of concept by training a model on CIFAR to make predictions in a word vector embedding space and showed this model could predict two unseen classes. The same year DeVISE scaled this approach and demonstrated that it was possible to fine-tune an ImageNet model so that it could generalize to correctly predicting objects outside the original 1000 training set.
Most inspirational for CLIP is the work of Ang Li and his co-authors at FAIR who in 2016 demonstrated using natural language supervision to enable zero-shot transfer to several existing computer vision classification datasets, such as the canonical ImageNet dataset. They achieved this by fine-tuning an ImageNet CNN to predict a much wider set of visual concepts (visual n-grams) from the text of titles, descriptions, and tags of 30 million Flickr photos and were able to reach 11.5% accuracy on ImageNet zero-shot.
Finally, CLIP is part of a group of papers revisiting learning visual representations from natural language supervision in the past year. This line of work uses more modern architectures like the Transformer and includes VirTex, which explored autoregressive language modeling, ICMLM, which investigated masked language modeling, and ConVIRT, which studied the same contrastive objective we use for CLIP but in the field of medical imaging.
Approach
Open AI shows that scaling a simple pre-training task is sufficient to achieve competitive zero-shot performance on a great variety of image classification datasets. Their method uses an abundantly available source of supervision: the text paired with images found across the internet. This data is used to create the following proxy training task for CLIP: given an image, predict which out of a set of 32,768 randomly sampled text snippets, was actually paired with it in our dataset.
In order to solve this task, Open AI's intuition is that CLIP models will need to learn to recognize a wide variety of visual concepts in images and associate them with their names. As a result, CLIP models can then be applied to nearly arbitrary visual classification tasks. For instance, if the task of a dataset is classifying photos of dogs vs cats we check for each image whether a CLIP model predicts the text description "a photo of a dog" or "a photo of a cat" is more likely to be paired with it.
Source and top image: Open AI