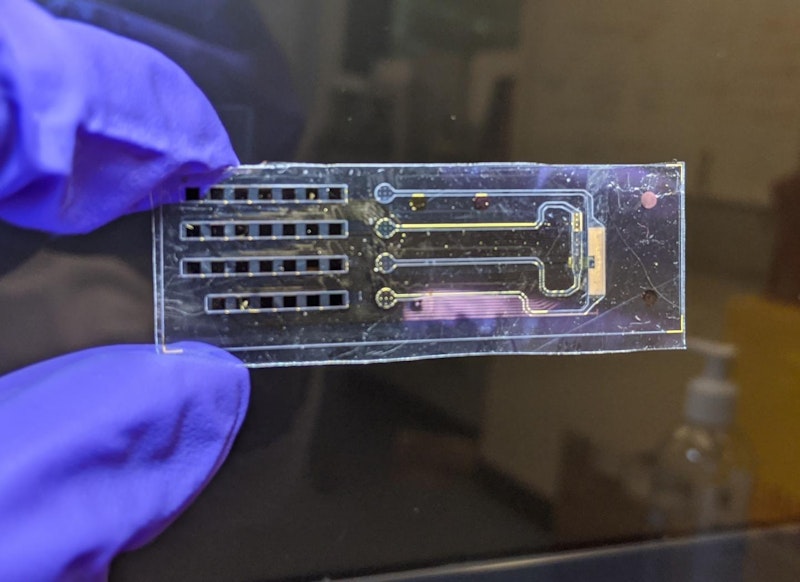 In an impressive proof-of-concept demonstration, an interdisciplinary team of scientists has developed a bioelectronic system driven by a machine learning algorithm that can shift the membrane voltage in living cells and maintain it at a set point for 10 hours.
Every living cell maintains a voltage across the cell membrane that results from differences in the concentrations of charged ions inside and outside the cell. Often called the membrane potential or resting potential, this voltage is regulated by ion channels in the cell membrane and plays important roles in cell physiology and functions such as proliferation and differentiation. For further information see the IDTechEx report on AI in Medical Diagnostics 2020-2030: Image Recognition, Players, Clinical Applications, Forecasts.
Controlling cells with bioelectronics is difficult due to the complex ways cells respond to changes in their environment and the natural self-regulating feedback process known as homeostasis. Cells regulate ion movements to maintain a steady membrane voltage, so the researchers had to develop a system that could counteract this natural response.
"Biological feedback systems are fundamental to life, and their malfunctioning is often involved in diseases. This work demonstrates that we can tweak this feedback using a combination of bioelectronic devices actuated by machine learning, and potentially restore its functioning," said Marco Rolandi, professor and chair of electrical and computer engineering at the UC Santa Cruz Baskin School of Engineering.
Rolandi is the senior corresponding author of the paper describing this work, published September 24 in the journal Advanced Intelligent Systems. The other corresponding authors who helped direct the project are Marcella Gomez, assistant professor of applied mathematics at UC Santa Cruz, and Michael Levin, director of the Center for Regenerative and Developmental Biology at Tufts University and associate faculty member of the Wyss Institute at Harvard University.
The researchers developed a system involving an array of bioelectronic proton pumps that add or remove hydrogen ions from solution in proximity to cultured human stem cells. The cells were genetically modified to express a fluorescent protein on the cell membrane that responds to changes in membrane voltage. The system is controlled by a machine learning algorithm that tracks how the membrane voltage responds to stimuli from the proton pumps.
"It is a closed-loop system, in that it records the behavior of the cells, determines what intervention to deliver using the proton pumps, sees how the cells react, then determines the next intervention needed to achieve and maintain the membrane voltage status we desire," Rolandi explained.
Gomez, who developed the machine learning algorithm, said the algorithm is not trained on any data in advance and does not rely on a model of the system. Instead, the "learning" happens in real time as the neural network responds to input regarding the current state of the membrane voltage.
"The adaptive nature of biology--that is, the ability of cells to change their response to external stimuli--calls for an adaptive approach in controls, where static models and past information can become obsolete," Gomez said.
Because the membrane voltage of stem cells is different from that of mature, differentiated cells, the researchers are interested in the possibility of using the system to induce and direct the differentiation of stem cells into specific cell types. They did not, however, explicitly look at cell differentiation in this proof-of-concept study.
More broadly, the combination of bioelectronics and machine learning in a closed-loop biohybrid system has many potential applications in regenerative medicine and synthetic biology, Rolandi said. He noted that the results of this study will inform the team's work on a major effort to develop a "smart bandage" providing bioelectronic intelligent control of wound regeneration. For further information see the IDTechEx report on Advanced Wound Care Technologies 2020-2030.
"This study is an important proof of concept for the use of bioelectronics and machine learning to control cell functions," he said.
Source and top image: University of California Santa-Cruz