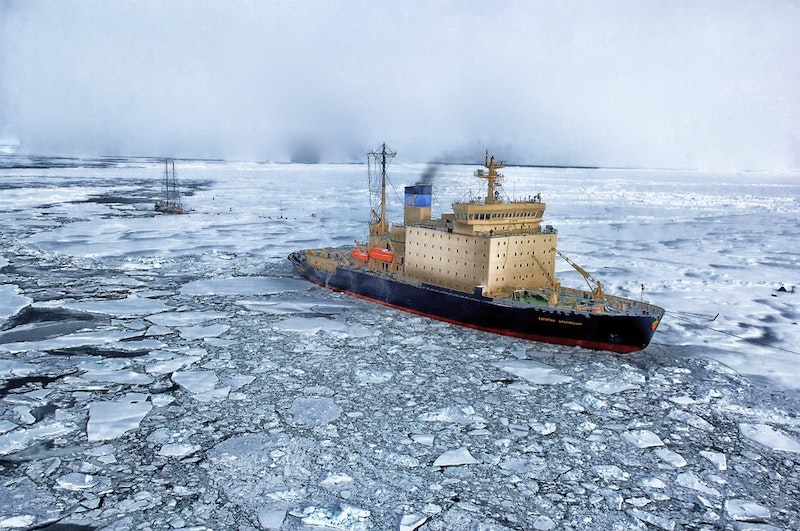 For vessels that journey into the polar seas, keeping control of the spread of sea ice is critical, which means that large resources are spent to collect data and determine future developments to provide reliable sea ice warnings.
As of now, large resources are needed to create these ice warnings, and most of them are made by The Norwegian Meteorological Institute and similar centres, Sindre Markus Fritzner tells us, who is a Doctoral Research Fellow at UiT The Arctic University of Norway. He is employed at the Department of Physics and Technology and has recently submitted a doctoral thesis where he has looked at the option of using artificial intelligence to make ice warnings faster, better, and more accessible than they are today.
In need of supercomputers
The ice warnings used today are traditionally based on dynamic computer models that are fed with satellite observations of the ice cover, and whatever updated data can be gathered about ice thickness and snow depth. This generates considerable amounts of data, which then needs to be processed by powerful supercomputers to provide calculations.
Dynamic models are physical models and require a lot of data to be processed. If you are going to make warnings about future events, you need to use a supercomputer, Fritzner explains. This is a limited and costly resource, which makes these warnings impossible to do without access to the right resources.
Artificial intelligence makes calculations accessible on a regular laptop
Fritzner has looked at how artificial intelligence can be used to provide these sea ice warnings faster, better, and cheaper than ever - on a regular laptop. Machine learning is a specialized field within artificial intelligence, where statistical methods are used to let computers find patterns and coherences in large sets of data. The machine learns instead of being programmed, and it all comes down to developing algorithms that enable computers to learn from and make calculations, based on empirical data. In Fritzner's work, for example, he has loaded in data to see how one specific week will unfold, and then data for how it will look one week later on.
Thus, it is the coherence in the development between these weeks that the machines learn itself, and in this way it can predict how it evolves, Fritzner says. When fully developed, such an algorithm will demand far less computing power than the traditional physical model. If you use artificial intelligence and have a fully trained model, you can run such a calculation on a regular laptop, Fritzner says.
Every vessel can make calculations on their own
This opens up for several fields of usage, one of them being more precise weather reports in The High North. Fritzner also points out that this can be used by the shipping industry that operate close to the marginal ice zone, and that this is a form of traffic that will only increase.
One example is cruise traffic, where it will be very important for the cruise vessels to know where the ice is, and where it will move in the next couple of days, Fritzner says. As it stands, high-resolution models can not be run on the vessel. They have to contact The Norwegian Meteorological Institute, who then needs to run the model on a supercomputer before they transmit the data back to the vessel. If you are on a vessel in The Barents Sea, you are dependent on being connected to a network to download the warnings from The Norwegian Meteorological Institute. If equipped with the right program and artificial intelligence, this can be done from the vessel itself, with nearly no computing power required at all, Fritzner says.
More development needed
Although the research so far looks promising, the results are still not as good as the traditional methods, but the evolution of machine learning/artificial intelligence is reaching full steam, and Fritzner has no doubts about its potential.
The experiences so far are good, but not perfect. What I observed when comparing machine learning and the traditional physical models was that they were much faster, and as long as the changes in the ice were small, the machine learning functioned quite well. When the changes were greater, with a lot of melting, the models struggled more than the physical models, Fritzner explains. He points to the challenge of the models running on artificial intelligence only relying on historical data, while the physical models constantly are adapted to large geophysical changes like increased melting and rapid changes to the weather.
In his experiments, Fritzner used data like temperature, the concentration of sea ice, and sea temperature. He believes the preciseness can be increased by adding more data to the model so that it has a larger set of data for the warnings it provides. Especially if you add wind and ice thickness, the machine learning will work much better, he says.
He believes further research and development will release the great potential that lies in this form of machine learning.
Source: UIT The Arctic University of Norway