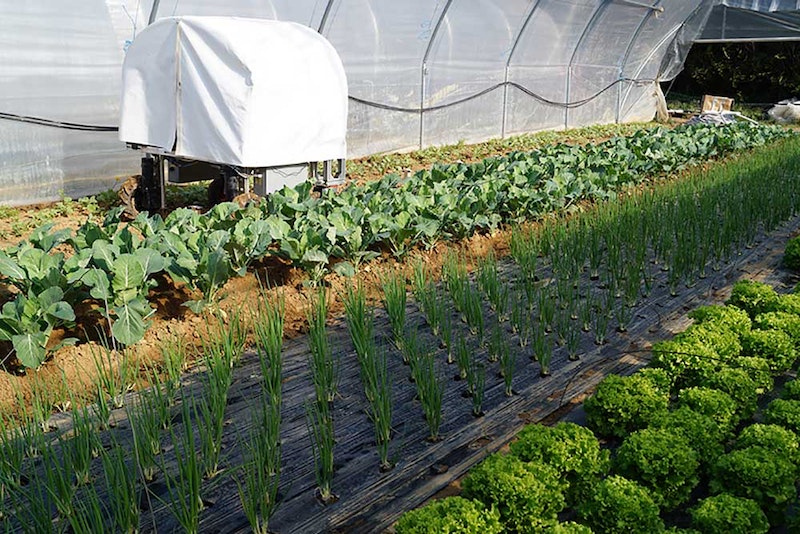 Robots that use artificial intelligence to recognise the health of fruit and vegetable crops and when they're ready to harvest are being trialled to help small, organic and greenhouse farmers with weeding and patrolling for pests. These robots can take on arduous tasks and help farmers save time. By spotting disease or pests early on, they can help cut down on the use of pesticides and reduce plant losses.
In Europe, land for agriculture is shrinking in part because of urbanisation. Meanwhile, there is a need for greener and more sustainable food production that uses fewer agrichemicals, which are costly and can pollute waterways. Alternatives to industrial monocrop farming include small and organic farms, market gardens - which sell produce directly to consumers or restaurants - as well as commercial greenhouses. But small farmers struggle with back-breaking manual work. And the machinery companies that make the expensive machines for large farms to sow and harvest single crops have traditionally ignored the needs of smaller growers. For further information see the IDTechEx report on Agricultural Robots and Drones 2018-2038: Technologies, Markets and Players.
Researchers, however, are now figuring out ways to help small farmers be more productive and profitable in the long term.
Farm helper robot
'Micro-farms are profitable and economically sustainable, but growers often struggle after around four years, as people develop back problems,' said Jonathan Minchin at the Institute for Advanced Architecture of Catalonia in Barcelona, Spain, who leads a project called ROMI which built a farm helper robot. The roving wheeled 'ROMI' has one arm for weeding small vegetable farms. Organic farmers spend about one-fifth of their time weeding, says Minchin, so developing a robot that could relieve people of this task was a key aim.
'This robot is made for small farms, not big farms. There is a huge need for this type of tool,' said Dr Christophe Godin who is a research director in plant modelling and computer science at Inria (the French National Institute for Research in Digital Science and Technology), who is also involved in the project.
To benefit small farmers, the robot had to be inexpensive and lightweight. ROMI's developers worked to keep its costs down by fitting it with off-the-shelf electric wheelchair motors and relying on open source hardware and software for AI and navigation, for instance. Once available, it should cost €5,000 or less.
Computational agriculture
Right now, a ROMI robot is being put through its paces to weed and navigate an organic farm in a forest outside Barcelona. A sister robot is weeding on a commercial organic farm called Pépinières Chatelain close to Paris Charles De Gaulle Airport. As market gardens and small farms grow a mix of crops, Minchin says 'computational agriculture' will allow robots to manage a complex variety of vegetable and fruit crops, growing at different rates and to different heights.
Scientists in the project use lots of imaging and mapping data with AI to identify and model plants. Dr Godin and computer scientist Dr Peter Hanappe, at the Sony Computer Science Laboratories in Paris, are working with the weeding robot in France. It has visual software that lets it capture 2D images. Once it takes a picture it must then interpret 'this soup of pixels', says Dr Godin. These images are used to create 3D computer models that the robot then uses to better understand or manipulate its environment. They want to teach the robot to understand what is a leaf, a stem, a fruit and so on.
Dr Godin wants to improve the computer image analysis so that plant scientists can use the data collected by the robot to study crop varieties in growth experiments. The 3D plant models may also be used for programming robots in precise fruit picking or to breed better crops in the future. It may also allow the scientists - and ultimately farmers - to track the health and growth of crops.
In the future, a ROMI could see lettuce start to shoot up and know when it's time to harvest, says Minchin. Or the technology could allow a new generation of farm robots to identify and pick fruit or vegetables when they are ripe.
Source and top image: Horizons EU Research and Innovation

Boeing Rolls out First Loyal Wingman Unamnned Aircraft
Webinar 7 May - Where Is the Future of COVID-19 Diagnostics?
Why Robots are Being Trained in Self-Awareness
New AI Tool to Evaluate all Possibilities in Robot Decisions