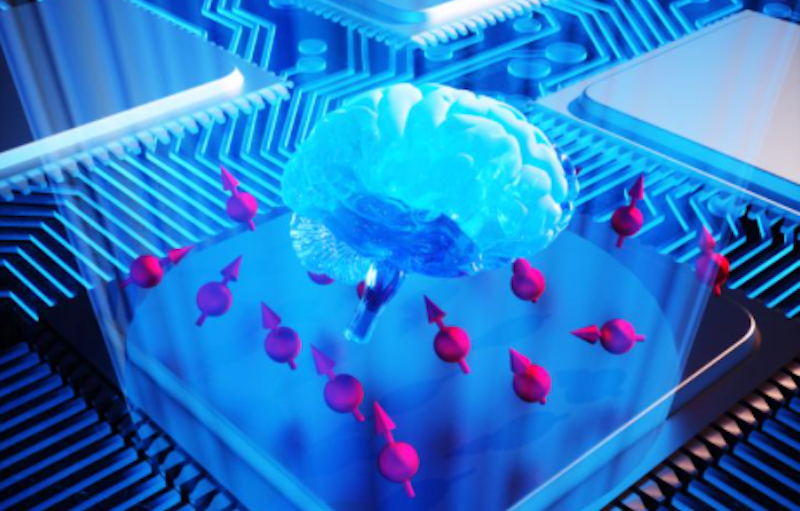 New research project to develop AI hardware; a completely new kind of computer system that mimics how the human brain is built up. Out with CPUs and memory storage, and in with artificial neural networks that can increase computer performance by up to 100,000 times compared to modern supercomputers.
Researchers from Aarhus University have just received DKK 33 million (EUR 4.4 million) from the prestigious EU framework programme Future and Emerging Technologies (FET) for a project that may have far-reaching consequences for the computer technology of the future.
The aim is to develop a neuromorphic computer system (NCS) as a novel AI hardware that can set a framework for AI software in a physical system built like a human brain. A setup like this has the potential for improving the performance of computing systems up to 100,000 times higher than even the state-of-the-art systems of today.
"A number of recent scientific breakthroughs, within spintronics, have meant that today we believe that we can create an artificial brain; a neuromorphic computer system that mimics the brain's synapses and neurons in a neural network that opens up for entirely new possibilities in cognitive computing, for example," says Associate Professor Farshad Moradi, an expert in integrated electronics from the Department of Engineering at Aarhus University.
The project is called SpinAge, and it is coordinated by Associate Professor Farshad Moradi, who has put together a strong international team of researchers to develop a unique, scalable and highly energy-efficient NCS as a proof-of-concept:
"The vision of SpinAge is to develop a neuromorphic computing system using synaptic neurons implemented in spintronics. A bottom-up approach from design and implementation of nano-scale spintronic computing components to large-scale integration that has never been done before," he adds.
The project will completely overturn the normal way of building computers via integrated circuits, by instead adopting a new hardware strategy focusing solely on the structure of the brain, with neurons, synapses and neural networks.
"Our brains work fundamentally differently from traditional computer systems. Various types of brain-inspired processors have already been developed, for example IMB's TrueNorth and Intel's Loihi, but we're looking at more than just the processors. We want to build a completely new type of computing system; a completely new consolidated platform which, like the brain, can perform extremely complicated functions very quickly and with very little energy consumption," says Farshad Moradi.
In other words, this is an entirely new technology that can radically change the way in which computers work.
Energy consumption is of particular interest, because it is regarded as the most important barrier to the artificial intelligence of the future. And this is precisely why we want to copy the structure of the human brain, as it has enormous processing power, but consumes very little energy. The aim of the project is to reduce the energy consumption of current computing systems by at least a factor of 100.
"Lately, much has been done to develop brain-like computer systems - AI systems developed on GPUs or CPUs - that are used for various purposes like robots, autonomous systems, and so on. But there's still a large gap of processing energy for such systems in comparison to the human brain, for example, in cognitive tasks. Throughout this project, we will try to fill this gap as much as possible," says Associate Professor Farshad Moradi.
Source and top image: Aarhus University