Artificial Intelligence to Run the Chemical Factories of the Future 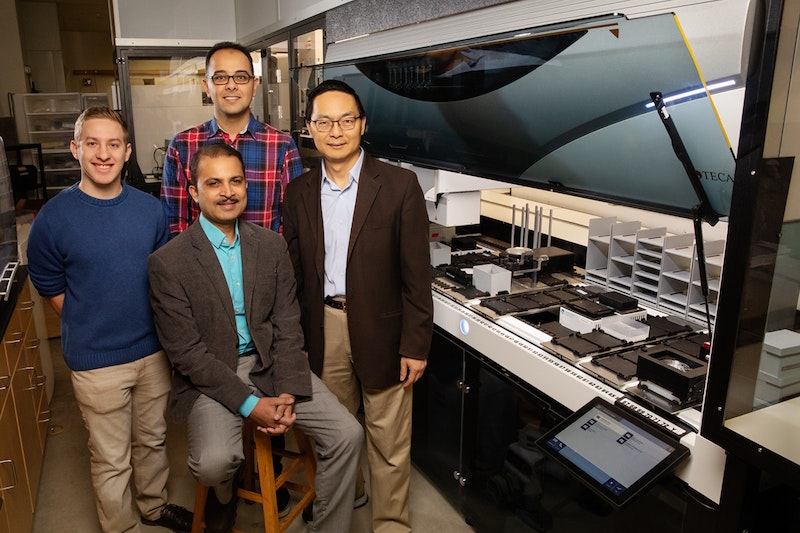 A new proof-of-concept study details how an automated system driven by artificial intelligence can design, build, test and learn complex biochemical pathways to efficiently produce lycopene, a red pigment found in tomatoes and commonly used as a food coloring, opening the door to a wide range of biosynthetic applications, researchers report. The results of the study, which combined a fully automated robotic platform called the Illinois Biological Foundry for Advanced Biomanufacturing with AI to achieve biomanufacturing, are published in the journal Nature Communications. For more information see the IDTechEx report on Smart City Opportunities: Infrastructure, Systems, Materials 2019-2029.
"Biofoundries are factories that mimic the foundries that build semiconductors, but are designed for biological systems instead of electrical systems," said Huimin Zhao, a University of Illinois chemical and biomolecular engineering professor who led the research.
However, because biology offers many pathways to chemical production, the researchers assert that a system driven by AI and capable of choosing from thousands of experimental iterations is required for true automation. Previous biofoundry efforts have produced a wide variety of products such as chemicals, fuels, and engineered cells and proteins, the researchers said, but those studies were not performed in a fully automated manner.
"Past studies in biofoundry development mainly focused on only one of the design, build, test and learn elements," Zhao said. "A researcher was still required to perform data analysis and to plan for the next experiment. Our system, dubbed BioAutomata, closes the design, build, test and learn loop and leaves humans out of the process."
BioAutomata completed two rounds of fully automated construction and optimization of the lycopene-production pathway, which includes the design and construction of the lycopene pathways, transfer of the DNA-encoding pathways into host cells, growth of the cells, and extraction and measurement of the lycopene production.
"BioAutomata was able to reduce the number of possible lycopene-production pathways constructed from over 10,000 down to about 100 and create an optimized quantity of lycopene-overproducing cells within weeks - greatly reducing time and cost," Zhao said.
Zhao envisions fully automated biofoundries being a future revolution in smart manufacturing, not unlike what automation did for the automobile industry. "A hundred years ago, people built cars by hand," he said. "Now, that process is much more economical and efficient thanks to automation, and we imagine the same for biomanufacturing of chemicals and materials."
Soruce: University of Illinois