Using AI to predict risk of thyroid cancer on ultrasound 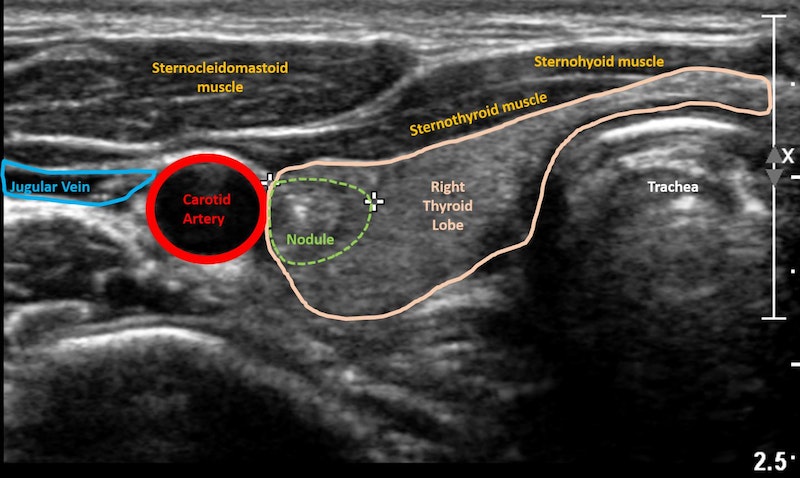 Thyroid nodules are small lumps that form within the thyroid gland and are quite common in the general population, with a prevalence as high as 67%. The great majority of thyroid nodules are not cancerous and cause no symptoms. However, there are currently limited guidelines on what to do with a nodule when the risk of cancer is uncertain. A new study from The Sidney Kimmel Cancer Center - Jefferson Health investigates whether a non-invasive method of ultrasound imaging, combined with a Google-platform machine-learning algorithm, could be used as a rapid and inexpensive first screen for thyroid cancer.
"Currently, ultrasounds can tell us if a nodule looks suspicious, and then the decision is made whether to do a needle biopsy or not," says Elizabeth Cottril, MD, an otolaryngologist at Thomas Jefferson University, and clinical leader of the study. "But fine-needle biopsies only act as a peephole, they don't tell us the whole picture. As a result, some biopsies return inconclusive results for whether or not the nodule may be malignant, or cancerous, in other words."
If examining the cells of a needle biopsy proves inconclusive, the sample can be further tested via molecular diagnostics to determine risk of malignancy. These tests look for the presence of certain mutations or molecular markers that are associated with malignant thyroid cancers. When nodules test positive for high risk markers or mutations, the thyroid may be surgically removed. However, the standards for when to use molecular testing are still in development, and the test is not yet offered in all practice settings, especially at smaller community hospitals.
In order to improve the predictive power of the first-line diagnostic, the ultrasound, Jefferson researchers looked into machine learning or artificial intelligence models developed by Google. These applications are being used in other spaces: retail giants like Urban Outfitters use machine learning to help classify their many products, making it easier for the consumer to find an item they're interested in. Disney uses it to annotate their products based on specific characters or movies. In this case, the researchers applied a machine-learning algorithm to ultrasound images of patients' thyroid nodules to see if it could pick out distinguishing patterns.
"The goal of our study was to see whether automated machine learning could use image-processing technology to predict the genetic risk of thyroid nodules, compared to molecular testing," says Kelly Daniels, a fourth year medical student at Jefferson and first author of the study.
The researchers trained the algorithm on images from 121 patients who underwent ultrasound-guided fine needle-biopsy with subsequent molecular testing. From 134 total lesions, 43 nodules were classified as high risk and 91 were classified as low risk, based on a panel of genes used in the molecular testing. A preliminary set of images with known risk classifications was used to train the model or algorithm. From this bank of labeled images, the algorithm utilized machine-learning technology to pick out patterns associated with high and low risk nodules, respectively. It used these patterns to form its own set of internal parameters that could be used to sort future sets of images; it essentially "trained" itself on this new task. Then the investigators tested the trained model on a different set of unlabeled images to see how closely it could classify high and low genetic risk nodules, compared to molecular tests results.
"Machine learning is a low-cost and efficient tool that could help physicians arrive to a quicker decision as to how to approach an indeterminate nodule," says John Eisenbrey, PhD, associate professor of radiology and lead author of the study. "No one has used machine learning in the field of genetic risk stratification of thyroid nodule on ultrasound."
The researchers found that their algorithm performed with 97% specificity and 90% predictive positive value, meaning that 97% of patients who truly have benign nodules will have their ultrasound read as "benign" by the algorithm, and 90% of malignant or "positive" nodules are truly positive as classified by the algorithm . The high specificity is indicative of a low rate of false positives; this means that if the algorithm reads a nodule as "malignant" it is very likely to truly be malignant. The overall accuracy of the algorithm was 77.4%.
"This was such an important collaboration of surgeons and radiologists, and there's already interest from other institutions to pool our resources. The more data we feed the algorithm, the stronger and more predictive we'd expect it to become," says Dr. Cottril.
"There are so many potential applications of machine learning," says Dr. Eisenbrey. "In the future we'd like to make use of feature extraction, which will help us identify anatomically relevant features of high risk nodules."
Though preliminary, the study suggests that automated machine learning shows promise as an additional diagnostic tool that could improve the efficiency of thyroid cancer diagnoses. Once it becomes more robust, the approach could give doctors and patients more information in order to decide if thyroid lobe removal is necessary.
Source and top image: Thomas Jefferson University