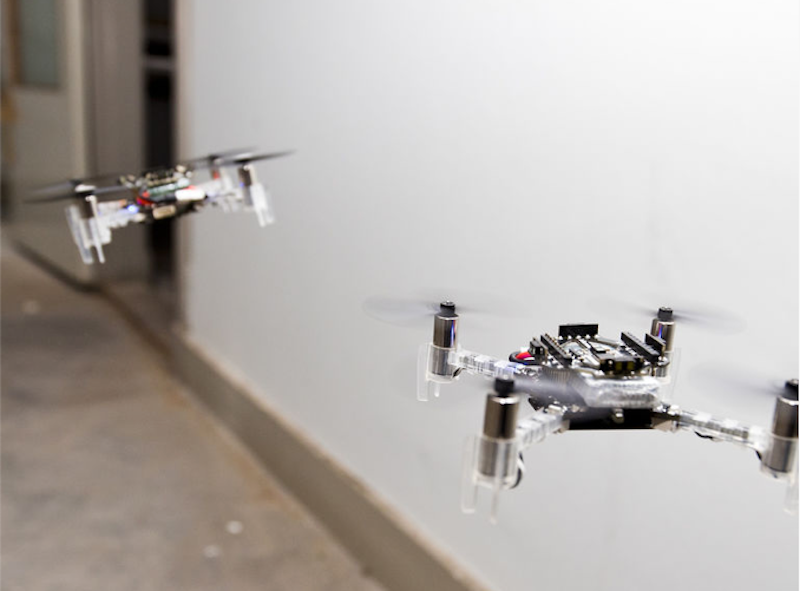 Researchers have presented a swarm of tiny drones that can explore unknown environments completely by themselves. This work forms a significant step in the field of swarm robotics. The challenge comes from the fact that the tiny 33-gram drones need to navigate autonomously while having extremely limited sensing and computational capabilities. The joint research team - with researchers from TU Delft, University of Liverpool and Radboud University of Nijmegen - tackled this challenge by drawing inspiration from the relative simplicity of insect navigation. For more information on this topic see the IDTechEx report on Drones 2018-2038: Components, Technologies, Roadmaps, Market Forecasts.
Inspiration from nature
Insect swarms have inspired roboticists to think that small robots may also be able to overcome their individual limitations by operating in a swarm. Swarms of small and cheap robots would be able to perform tasks that are currently out of reach of large, individual robots. For instance, a swarm of small flying drones would be able to explore a disaster site much quicker than a single larger drone. Such swarms have not been realised yet.
Search-and-rescue
Over the last four years, a joint research team of the universities of TU Delft, University of Liverpool, and Radboud University of Nijmegen, financed by the Dutch national science foundation NWO Natural Artificial Intelligence programme, has strived to design a swarm of tiny drones able to explore unknown environments. The goal of the research project was to make steps towards using swarms of drones in search-and-rescue scenarios. The main idea was that in the future, rescue workers will be able to release a swarm of tiny drones to explore a disaster site such as a building that is about to collapse. The swarm of drones will enter the building, explore it, and come back to the base station with relevant information. The rescue workers can then focus their efforts on the most relevant areas - for instance, where there are still people inside.
Finding victims
In the project tiny drones were equipped with cameras and sent out in an indoor office environment to find two dummies representing victims in a disaster scenario. This proof-of-concept search-and-rescue task clearly showed the advantage of having a swarm. Within 6 minutes, a swarm of 6 drones was able to explore about 80% of the open rooms - which would be impossible for one of the drones alone. Furthermore, swarming also turned out be useful for redundancy. One drone found a victim, but due to a hardware failure of the camera, it could not bring back any images. Luckily, another drone captured the victim on camera as well.
Challenge
"The biggest challenge in achieving swarm exploration lies at the level of the individual intelligence of the drones," says Kimberly McGuire, the PhD student who has performed the project. "In the beginning of the project, we focused on achieving basic flight capabilities such as controlling the velocity and avoiding obstacles. After that, we designed a method for the small drones to detect and avoid each other. We solved this by having each drone carry a wireless communication chip and then making use of the signal strength between these chips - this is like the number of bars shown on your phone that decrease when you move away from your WiFi router in your home. The main advantages of this method are that it does not require extra hardware on the drone and that it requires very few computations."
Autonomous navigation
The most daunting challenge in the way of swarm exploration, is the difficulty of making small robots navigate an unknown environment by themselves. The reason for this is that tiny robots are very limited in terms of sensing and computation. Again, nature provided important inspiration. Insects do not make highly detailed maps. Instead, they retain landmarks and behaviorally relevant places like food sources and their nest. "The main idea underlying the new navigation method is to reduce our navigation expectations to the extreme: we only require the robots to be able to navigate back to the base station, " says Guido de Croon, principal investigator of the project. "The swarm of robots first spreads out into the environment by having each robot follow a different preferred direction. After exploring, the robots return to a wireless beacon located at the base station." For more information see the IDTechEx report on Mobile Robots and Drones in Material Handling and Logistics 2018-2038.
Bug algorithm
"The proposed navigation method is a novel type of bug algorithm," adds Kimberly McGuire. "Bug algorithms do not make maps of the environment but deal with obstacles on the fly. In principle, detailed maps are very convenient, because they allow a robot to navigate from any point in the map to any other point, along an optimal path. However, the costs of making such a map on tiny robots is prohibitive. The proposed bug algorithm leads to less efficient paths but has the merit that it can even be implemented on tiny robots."
Source and top image: Delft University of Technology

Agricultural Robots and AI: A Question of When and Not If
Swarming Robots Avoid Collisions, Traffic Jams
How Close are we to Autonomous Cars?
Autonomous Driving: Peak Car to Arrive as Early as 2031?