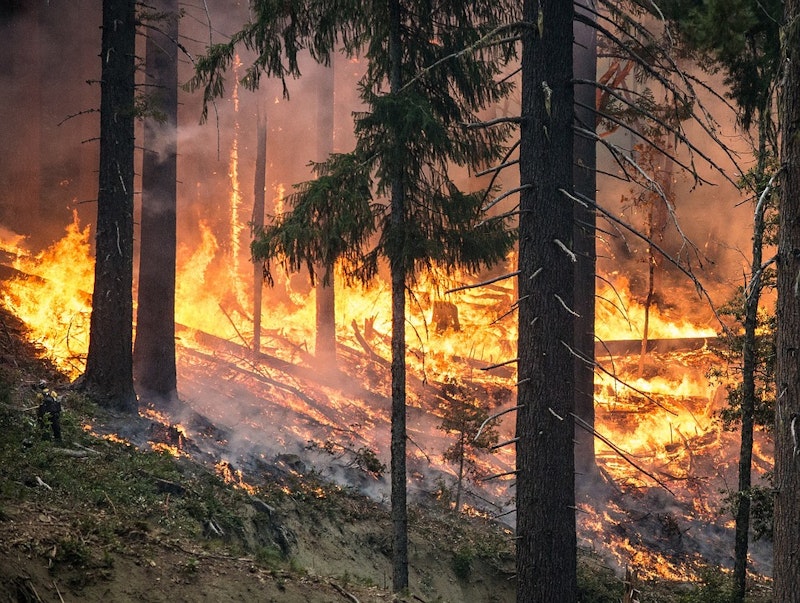 An interdisciplinary team of scientists at the University of California, Irvine has developed a new technique for predicting the final size of a wildfire from the moment of ignition.
Built around a machine learning algorithm, the model can help in forecasting whether a blaze is going to be small, medium or large by the time it has run its course -- knowledge useful to those in charge of allocating scarce firefighting resources. The researchers' work is highlighted in a study published in the International Journal of Wildland Fire.
"A useful analogy is to consider what makes something go viral in social media," said lead author Shane Coffield, a UCI doctoral student in Earth system science. "We can think about what properties of a specific tweet or post might make it blow up and become really popular -- and how you might predict that at the moment it's posted or right before it's posted."
He and his colleagues applied that thinking to a hypothetical situation in which dozens of fires break out simultaneously. It sounds extreme, but this scenario has become all too common in recent years in parts of the western United States as climate change has resulted in hot and dry conditions on the ground that can put a region at high risk of ignition.
"Only a few of those fires are going to get really big and account for most of the burned area, so we have this new approach that's focused on identifying specific ignitions that pose the greatest risk of getting out of control," Coffield said.
The team used Alaska as a study area for the project because the state has been plagued over the past decade by a rash of concurrent fires in its boreal forests, threatening human health and vulnerable ecosystems. For more information see the IDTechEx report on Smart City Opportunities: Infrastructure, Systems, Materials 2019-2029.
At the core of the UCI scientists' model is a "decision tree" algorithm. By feeding it climate data and crucial details about atmospheric conditions and the types of vegetation present around the starting point of a fire, the researchers could predict the final size of a blaze 50 percent of the time. A key variable is the vapor pressure deficit -- just how little moisture there is in the area -- during the first six days of a fire's existence. A second major consideration for Alaskan forests is the percentage of trees of the black spruce variety.
"Black spruce, which are dominant in Alaska, have these long, droopy branches that are designed -- from an evolutionary perspective -- to wick up fire," said co-author James Randerson, professor and Ralph J. & Carol M. Cicerone Chair in Earth System Science at UCI. "Their seeds are adapted to do well in a post-fire environment, so their strategy is to kill off everything else around them during a fire to reduce competition for their offspring." He said Coffield was able to show that the fraction of black spruce within a 2.5-mile radius of the ignition site is an important factor in judging how big a fire will grow.
One advantage of this new method is speed, Coffield said. The algorithm "learns" with each new data point and can quickly figure out the critical thresholds for identifying large fires. It's possible for people to do this manually or by running simulations on each different ignition, he said, but the machine learning system's statistical approach is "really much faster and more efficient, especially for considering multiple fires simultaneously."
Faced with a climate change-induced jump in the number of wildfires expected each season, state, county and local firefighting authorities could benefit from some updated tools and techniques, Randerson noted. In addition to potentially saving lives and protecting property and crucial infrastructure, fire suppression efforts will also become increasingly important in preserving the natural world.
"In places like Alaska, there's a need to limit the area affected by fire, because if we keep having these unusual, high-fire years, more carbon will be lost from the landscape, exacerbating warming," Randerson said. "If we let the fires run away, we could be in a situation where there's a lot of significant damage to both the climate system and ecosystems."
Source: University of California, Irvine
Top image: Pixabay