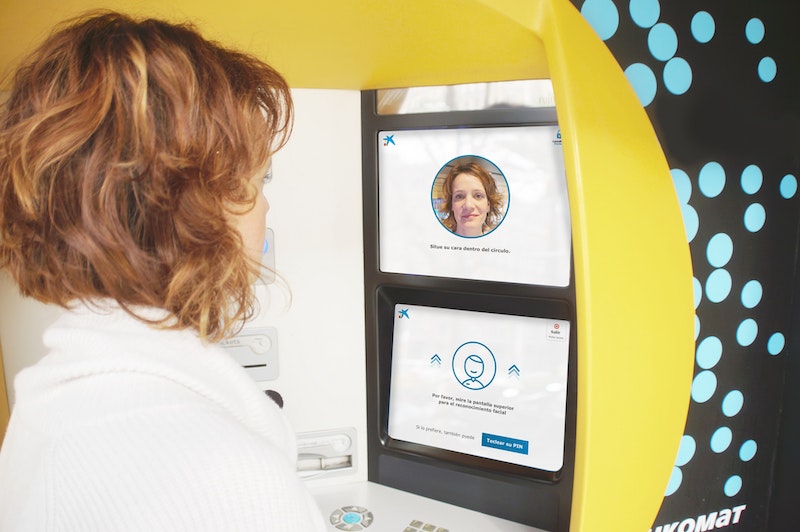 CaixaBank has been recognised for the innovation of its ATMs with biometric technology, the world's first ATMs to allow withdrawals using facial recognition and without having to enter a PIN. This new service offered by CaixaBank, launched in February, has been chosen for awards for innovation and contribution to the technological transformation of the global financial sector.
CaixaBank's ATMs with facial recognition are groundbreaking on a global level, as they allow users to withdraw money from an ATM by simply recognising them from the image captured by the terminal's camera. The ATM has the hardware and software needed to validate up to 16,000 points on the image of the user's face, which guarantees totally secure identification.
The objective of implementing biometric technology in ATMs is to offer a better user experience and greater security in transactions, given that it streamlines the customer identification process, and makes it possible to withdraw cash without memorising multiple passwords.
CaixaBank has implemented this verification system in a selection of ATMs in Barcelona and Valencia and has plans to progressively expand facial recognition across its Store branches from the second half of 2019.
With the launch of facial recognition in ATMs, CaixaBank is strengthening its commitment to biometrics as a technology that facilitates customer access to the Company's service, in a simpler, more convenient way. In 2017, the Company already became the first bank in Spain to incorporate the Face ID technology of the iPhone X, which had just hit the market. With this service, customers can access their accounts through facial recognition on their mobile device, without having to enter access information, such as their ID number, username and password.
CaixaBank is the leader in retail banking in Spain, with a 29.3% penetration rate among individual customers. Technology and digitalisation support the Company's business model, which continues to strengthen its leadership in digital banking with 6.3 million digital customers in Spain (59.4% of total customers).
The Company developed the first commercial implementation of contactless and mobile payment systems in Europe, the creation of the world's first contactless ATMs, the launch of imaginBank, the first mobile bank in Spain, and the development of the first artificial intelligence application for customer assistance.
Source and top image: CaixaBank