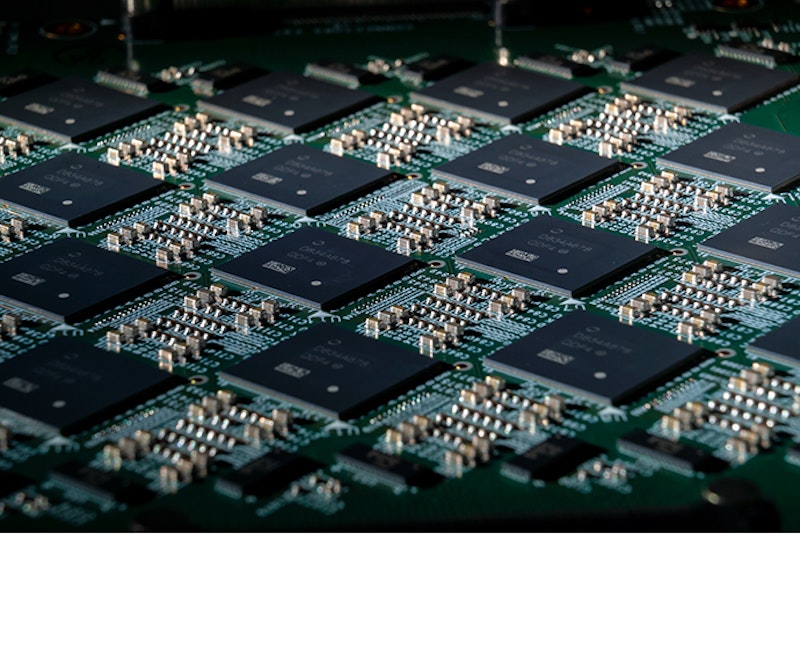 Intel has announced that an 8 million-neuron neuromorphic system comprising 64 Loihi research chips — codenamed Pohoiki Beach — is now available to the broader research community. With Pohoiki Beach, researchers can experiment with Intel's brain-inspired research chip, Loihi, which applies the principles found in biological brains to computer architectures. Loihi enables users to process information up to 1,000 times faster and 10,000 times more efficiently than CPUs for specialized applications like sparse coding, graph search and constraint-satisfaction problems.
"We are impressed with the early results demonstrated as we scale Loihi to create more powerful neuromorphic systems. Pohoiki Beach will now be available to more than 60 ecosystem partners, who will use this specialized system to solve complex, compute-intensive problems," said Rich Uhlig, managing director of Intel Labs.
With the introduction of Pohoiki Beach, researchers can now efficiently scale up novel neural-inspired algorithms — such as sparse coding, simultaneous localization and mapping (SLAM), and path planning — that can learn and adapt based on data inputs. Pohoiki Beach represents a major milestone in Intel's neuromorphic research, laying the foundation for Intel Labs to scale the architecture to 100 million neurons later this year.
Continuing the gains in power and performance enabled by Moore's Law will require more than continued process-node scaling. As new complex computing workloads become the norm, there is a growing need for specialized architectures designed for specific applications. The Pohoiki Beach neuromorphic system demonstrates the benefits of a specialized architecture for emerging applications, including some of the computational problems hardest for the internet of things (IoT) and autonomous devices to support. By using this type of specialized system, as opposed to general-purpose computing technologies, Intel expects to realize orders of magnitude gains in speed and efficiency for a range of real-world applications, from autonomous vehicles to smart homes to cybersecurity.
With the introduction of Pohoiki Beach, Intel will allow ecosystem partners worldwide to continue to pioneer the next frontier of neural-inspired algorithmic research. At the Telluride Neuromorphic Cognition Engineering Workshop, for example, researchers are using Loihi systems to solve challenges at the cutting edge of neuromorphic engineering. Projects include providing adaptation capabilities to the AMPRO prosthetic leg, object tracking using emerging event-based cameras, automating a foosball table with neuromorphic sensing and control, learning to control a linear inverted pendulum, and inferring tactile input to the electronic skin of an iCub robot.
In addition to the work coming out of Telluride, other research partners are already seeing the benefits of Loihi at scale: "With the Loihi chip we've been able to demonstrate 109 times lower power consumption running a real-time deep learning benchmark compared to a GPU, and 5 times lower power consumption compared to specialized IoT inference hardware," said Chris Eliasmith, co-CEO of Applied Brain Research and professor at University of Waterloo. "Even better, as we scale the network up by 50 times, Loihi maintains real-time performance results and uses only 30 percent more power, whereas the IoT hardware uses 500 percent more power and is no longer real-time."
"Loihi allowed us to realize a spiking neural network that imitates the brain's underlying neural representations and behavior. The SLAM solution emerged as a property of the network's structure. We benchmarked the Loihi-run network and found it to be equally accurate while consuming 100 times less energy than a widely used CPU-run SLAM method for mobile robots," professor Konstantinos Michmizos of Rutgers University said while describing his lab's work on SLAM to be presented at the International Conference on Intelligent Robots and Systems (IROS) in November.
In 2017, Intel introduced Loihi, its first neuromorphic research chip, taking a major step forward in the development of neuromorphic hardware. In March 2018, the company established the Intel Neuromorphic Research Community (INRC) to further the development of neuromorphic algorithms, software and applications. Through INRC, Intel provides access to its Loihi cloud systems and Kapoho Bay, a Loihi-based USB form factor system, which has invigorated research on real-world applications for neuromorphic technologies. Pohoiki Beach accelerates this effort by providing greater computational scale and capacity to Intel's research partners.
Later this year, Intel will introduce an even larger Loihi system named Pohoiki Springs, which will build on the Pohoiki Beach architecture to deliver an unprecedented level of performance and efficiency for scaled-up neuromorphic workloads.
Intel's engineers expect that measurements from these research systems will quantify the gains that are achievable with neuromorphic-computing methods and will clarify the application areas most suitable for the technology. This research paves the way for the eventual commercialization of neuromorphic technology.
Source and top image: Intel

Agricultural Robots and AI: A Question of When and Not If
Boeing Rolls out First Loyal Wingman Unamnned Aircraft
Webinar 7 May - Where Is the Future of COVID-19 Diagnostics?
Robots Weeding Organic Farms, Patrolling for Greenhouse Pests