Showa Denko K.K. (SDK) has developed a new structure for its organic electroluminescent (organic EL) devices, achieving approximately 40% in light output, which represents the highest level in the world claim the company.
As a result, SDK has achieved a 30 lm/W emissive efficiency for its coated phosphorescent-polymer-based organic EL devices. ("Emissive efficiency" refers to the quantity of light emitted from light source, divided by electric power consumed). The 30 lm/W emissive efficiency represents the highest level reported among coated-type organic EL devices.
They are developing a coated-polymer type (easy to make large area-emission organic EL panels) and a phosphorescent type (with high potential for increased emissive efficiency), and expect the organic EL devices with the new structure to be used widely for general lighting applications in the future.
SDK will continue working with SRI International, a non-profit research organization based in California, U.S.A., and Itochu Plastics Inc. (CIPS), of Japan, to promote the development of the devices for early commercialization in the organic EL lighting market.
In terms of the production process, organic EL devices are classified into a deposition type and a coated type. The former generally has a multilayered structure of low-molecular-weight-compounds laminated through deposition processes under vacuum. Its production technology has almost been established, making it ready for volume production. However, its production cost is high, and there are many issues to be solved in producing a large area-emission panel based on this device.
Meanwhile, the coated type is attracting keen attention because it consists of a few layers formed by coating polymer without the use of vacuum, providing the opportunity for substantial cost reductions and for the production of large area-emission panels in the future.
Organic EL devices are also classified by the emission method, into a fluorescent type and a phosphorescent type. At present, the former has longer life and is already used in displays of mobile phones. Meanwhile, emissive efficiency (lm/W) of the phosphorescent type can theoretically become four times that of the fluorescent type.
While the conventional-type device has a structure of cathode, emitter, anode, and glass substrate, the new structure has introduced a layer of dielectric/heat conductor that adjusts reflection of light. The new layer helps reduce the percentage of light trapped in the device, improving the light output. The dielectric/heat conductor layer, having high heat dissipation efficiency, prevents heat deterioration of the emitter, prolonging the device life.
Structure of a coated- phosphorescent-polymer-based organic EL device 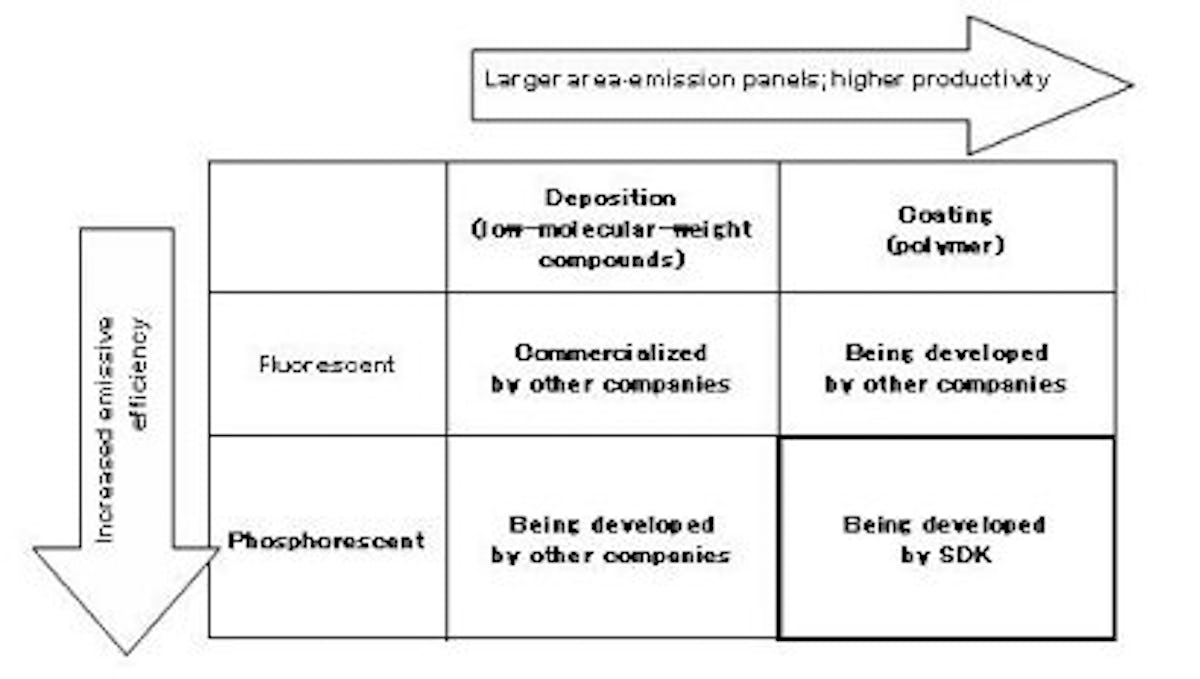