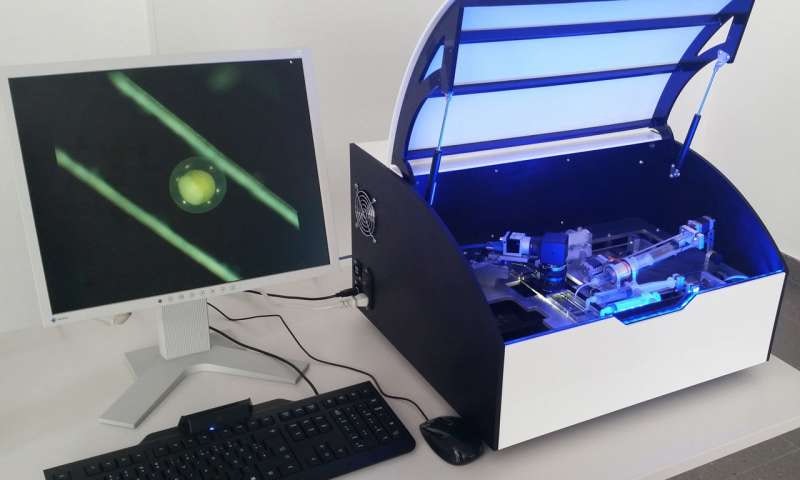 Zebrafish possess almost all of the same genes we humans do - and that makes their eggs the perfect model organisms for use in genetic and drug research. Previously, samples have had to be prepared manually, which is a very time-consuming task. Now, however, a clever machine learning algorithm will be able to separate and sort the fish eggs automatically.
The zebrafish, or danio rerio, has long been popular as a model organism for cell and molecular biologists. Measuring just six centimeters in length when adult, these tiny creatures hatch out of transparent eggs spawned by the mother fish. The fish is extremely valuable to researchers because its eggs remain transparent right into the early larval stage, which allows scientists to observe the developing cells and organs under the microscope without damaging the embryos. A mature female can lay several hundred eggs each week, which can then be used in the lab for genetic and drug research: toxicology studies of cancer drugs for instance or the investigation of heart diseases. The zebrafish genome is a 70-percent match for the human genome, and some of the most important organ systems are also the same - making it extremely valuable for biomedical research.
Working toward a high-throughput analysis system
If there is one difficulty with preparing fish egg samples, it is that a specialist is required to manually inspect each egg, determine its stage of fertilization, classify it under the microscope and then place it on a microtiter plate. It currenly takes a trained lab technician around 12 minutes to fill a standard 96-well microtiter plate - with the monotony of the task only increasing the rate of error. Researchers at Fraunhofer IPA in Stuttgart wanted to speed up this process, and now a new automated solution is expected to classify three eggs a second and sort fertilized eggs into a 96-well microtiter plate in under two minutes.
The goal is to establish a high-throughput analysis process that can be incorporated into a fully automated system, thereby further increasing sample processing rates. The initiative is funded by Baden-Württemberg's State Ministry of Economic Affairs, Labour and Housing Construction as part of a project entitled "Laboratory 4.0 Application Center - The Cloud Laboratory."
"Not only does this technology take the strain off the lab technicians who have to prepare the samples, it's also a way to bypass the choke point in the process chain, cut staffing costs and increase the speed with which products such as new medicines can be developed," says Bastian Standfest, a researcher in Technology and Device Development within Fraunhofer IPA's department for Laboratory Automation and Biomanufacturing Engineering. Together with group leader Martin Thoma and colleagues Xi Chen and Sascha Getto from the department of Image and Signal Processing, Standfest is responsible for developing the automated fish egg sorter that is now available in prototype form. The core of the solution is a camera system that identifies the stage of fertilization using a machine learning algorithm.
A self-learning system
A rotating syringe sucks the mixture of fertilized and unfertilized eggs out of a ventilated container, adding them to a transfer liquid so that in the next step they can be directed into a fluidic channel and separated there.
Optical sensors monitor the entire process. After that, the camera system uses a deep learning algorithm trained to recognize various stages of cell development so as to determine the eggs' stage of fertilization. "We're training the algorithm using a database of images of classified fish eggs. The algorithm learns to identify the various markers of the different stages of cell development as it goes, and this is what allows it to determine whether an egg is fully fertilized or not," explains Standfest. The fertilized eggs are placed in the wells of the microtiter plate by means of a pressure pulse generated by the fluidic chip. Initial testing has gone well, with an extremely low false positive rate - only in 0.2 percent of cases was an unfertilized egg erroneously classified as fertilized. The research team anticipates being able to process several thousand eggs an hour.
At the moment, Standfest and his colleagues are busy at work maximizing the speed of the process and optimizing the algorithm. "The newly recorded images are constantly being fed back into the system, gradually improving it until, we hope, we have a self-learning system," says Standfest. "On top of that, we can potentially adapt the system to other macroscopic sorting processes, including automated separation and classification of other organisms."
The current design represents a first use case for an intelligent and self-learning system of this type. This platform technology is the first step toward bio-intelligent systems, and it can potentially be adapted to other areas of application. Projects of this type moreover support the biological transformation of manufacturing at the interface between the life sciences and engineering.
Source and top image: Fraunhofer Gesellschaft